For more than 130 years, people have enjoyed playing dice baseball board games. The first such game was introduced in 1884. Produced by R. Bliss Mfg., the game was called League Parlor Base Ball.

Over the years, hundreds of games have been developed using dice to play the game of baseball. As time passed, game creators began trying to recreate baseball in a more realistic manner. Their games became more sophisticated, relying on multiple dice, outcome charts, and even actual player statistics. A lot of serious baseball fans fell in love with these more detailed board games.

In his article entitled Baseball on the Table-top, Steve Kurzban1 states, “Baseball fanatics follow their game and favorite team through statistics that go back over 120 years. No other professional sport has the history or love of number as Baseball.”

This is so true! Talk with a true baseball fan and they will almost always start talking about player statistics, whether it be from their favorite team or a team of the past. Records are constantly being set and broken.

For example, the 2014 Kansas City Royals are the first team ever to start out with three straight extra-inning wins in the playoffs.

Meanwhile, Clayton Kershaw of the Los Angeles Dodgers, who compiled the best pitching statistics of any player, by far, during the 2014 regular season, set a record as the first pitcher in history to give up seven runs in consecutive playoff games (2013 and 2014). Go figure!

Baseball fans love statistics! This love eventually showed up in board games. The drive to develop a game that came as close to individual baseball player realism ended up incorporating each player’s statistics in a way that didn’t overwhelm the board game players, yet made the game seem realistic.

Until 1931 baseball board games that had been produced commercially were always generic. There was no distinction between good hitters and poor hitters, no focus on the pitching abilities of any individual pitcher.

In 1931, Clifford VanBeek commercially patented the first board game that utilized individual ball player statistics. The game was called National Pastime. Two dice were thrown, creating a two-digit number between 11 and 66. That number indexed into a specific batter’s chart, based on previous year’s statistics, to determine the outcome of a play. Pitching and fielding still had no effect on the play, however.

Unfortunately, the Great Depression took away any opportunity for the game to capture a large audience. It died after just one year!

Ten years later, Ethan Allen came out with a game called All-Star Baseball. Rather than using dice, this game provided a “disk” for specific players on each team. The disk was divided into numbered segments that were sized based on the player’s statistics from the previous year. A total of 40-64 disks were created each year until the 1990s, when the game disappeared.

To play the game, the disk was placed on a spinner and when the spinner stopped, the resulting number was utilized to determine the result of the play. Knowing how my grandkids argue over spinner results in a game like Chutes and Ladders, I have to wonder how many arguments raged over whether the spinner was showing a hit or an out.

The Best Baseball Board Games

Two board games that followed in the next 20 years have withstood the test of time. As a result, they have gathered the largest following of dedicated players.

Richard Seitz came out with a new dice baseball board game called APBA in 1951. As a teen, he became a National Pastime game player. Using that game, he and his friends organized a league that they named American Professional Baseball Association.

As a result, his new game used a format similar to its predecessor. The key improvement was that Seitz incorporated defensive and base running statistics, as well as individual pitching skills, so it simulated a baseball game much more closely. The game came with cards representing the top 20 players from each of the 16 existing MLB teams.

Then, in 1961, Hal Richman started selling Strat-O-Matic Baseball. This board game utilized three dice, one to pick a column on a player’s card, the other two to determine the play outcome. The numbers 1-3 on the first die pointed to the individual batter’s card while 4-6 selected the pitcher’s card. By using three dice, Richman was able to significantly reduce the reliance on additional charts to determine the play outcome.

This game included a card for most every player on each team. Strat-O-Matic now supports all teams that have played since the early 1900s. It continues to provide yearly releases that support every major league team.

Watch the following video to learn more about Strat-O-Matic and baseball board games in general:

Both APBA and Strat-O-Matic are still sold today. They have been perennial competitors for years. Each has been revised and upgraded over the years. Both games now offer a basic version for those who aren’t that excited about the statistical details and an advanced or master edition for those who are. There are also online versions available for both games.

Newer Games on the Market 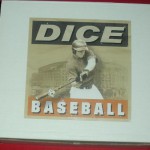 Are you most interested in statistical simulation? Pursue the Pennant, which was considered to be the most statistically accurate game of its time, became commercially available in 1985. Unfortunately, it went out of production in 1994.

Dynasty League Baseball, a redeveloped version of the Pursue the Pennant game, is now considered by some to be the most strategic and statistically realistic of all available games today. It utilizes three 10-sided dice to determine the play outcome. The downside of the game is that it takes a bit longer to complete due to the number of charts and rules that must be utilized.

Only time will tell whether any of these can cut into the large, dedicated followings of APBA and Strat-O-Matic, both of which host annual conferences and tournaments.

A good portion of the information provided in this write-up was drawn from two excellent sources:
1. Kurzban, S. (2011). Baseball on the Table-top. Gamers Alliance Report. Found at http://www.gamersalliance.com/F10/baseball.htm
2. Baseball Games. (2011). A brief history of tabletop baseball. Found at http://baseballgames.dreamhosters.com/BbHistory.htm

6 thoughts on “Dice Baseball Board Games”