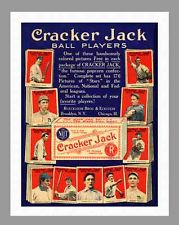 Baseball cards in Cracker Jacks? Strange perhaps, but you can find both 1914 and 1915 Cracker Jack Baseball Cards for sale on sites around the internet.

In fact, these mini-sized cards have become a highly sought-after prize for card collectors.

Actually, this combination isn’t so strange. Think about the song Take Me Out to the Ballgame, which we often sing as a crowd during the seventh inning stretch. One line says, “Buy me some peanuts and Cracker Jack”.

The caramelized treat has been associated with baseball for many years.

Did you ever buy Cracker Jacks as a youngster and excitedly dig down into the box to find the toy? Remember how small the “toys” were.

Well, for the two years of 1914 and 1915, the Cracker Jack company created sets of baseball cards that fit the small toy focus. Each card measured only 2 ¼ inches by 3 inches tall.

There were 144 cards in the 1914 set. They were printed on thick paper instead of cardboard.

The player’s image was a color drawing and was set against a background that was a deep red color. Cracker Jack Ball Players was used as the heading on the cards.

The player’s name, team, and league affiliation were printed near the bottom on the front of the card. Top players were featured from the American and National leagues, as well as the then-existing Federal league, which lasted only two years.

On the back, the card number is listed along with a player biography. Additionally, there is an advertisement stating that there were 144 cards in the set.

For 1915, a full set of cards included 176 players. This set has become more popular, primarily due to greater availability.

During that year, not only did Cracker Jack put an individual card in the candy box but they also made the entire set available through a mail-in offer. Due to this, more cards got out into the market.

Though the cards in the two sets are very similar, one key difference is found on the back side of the cards. As noted, the 1914 cards advertised a set of 144 cards. The 1915 cards noted that the new set included 176 cards.

One interesting feature of the Cracker Jack cards is that the paper on which they were printed served as the border of the card. Because of this, it is common to find bleeding of the image onto the card’s border. Counterfeit cards could not duplicate this feature and were thus relatively easy to detect.

Unfortunately, the beginning of WWI changed the focus of the company and the cards were dropped after two years of production. The limited production is one of the key reasons why these have become valuable collector’s items.

An interesting fact is that Babe Ruth is not included in either Cracker Jack set. In 1915, while still a young pitcher for the Boston Red Sox, he came into his own to win 18 games. He only pitched in 4 games during the 1914 season, however, and as a result he didn’t make the 1915 set.

Even without Ruth, the cards are highly sought after.

So, are there any of these cards for sale? Sure they are. You can find some in very good condition for sale online at Dave’s Vintage Baseball Cards or through Dean’s Cards.

A number of cards can also be found on EBay. Just be sure that you only buy the originals, not reprints created in the 1990s (you can tell by the asking price, generally).

Note that most of these cards are in the $75 to $400 range. If you are thinking of buying a card or two, compare the asking price to this 1915 price guide.

Are you interested in collecting cards that will probably still rise in value? Do you know anyone who owns any of these? What are your thoughts on these interesting sets?