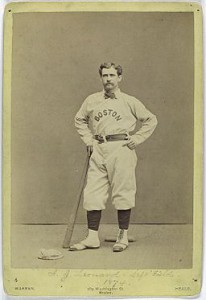 You never know about old baseball cards! One woman wanted to find out how much her Boston Red Stockings cards were worth. So, this past August she brought her family treasure to a taping of the Antiques Roadshow program in New York City.

The heirloom, passed down from her great-great-great grandmother, included 12 baseball cards, one picture, a letter, and an 1872 Red Stockings season pass.

So why do we care about the Boston Red Stockings? Who were they anyway? Let’s go back in history a little bit.

The Cincinnati Red Stockings played in the National Association of Base Ball Players (NABBP) from 1867-1870. Harry Wright, a former English cricket player and then a Cincinnati businessman, helped formed the club.

They became baseball’s first known professional team in 1869 with 10 players, many former cricket players, drawing a salary. That year, they also were the first baseball team to play on both the east coast and the west coast in a single season.

Harry played center field for the team and coordinated the defense. His younger brother George became the shortstop that season and was arguably the best player on the team. During the 1869 season, the team played 69 games and never lost.

In other words, they were pretty good! It is still the only perfect season in professional baseball history.

Next stop is Boston

As attendance dwindled the following year, a decision was made to move the team to Boston beginning in 1871. In Boston they kept the Red Stockings moniker.

For the next four seasons, the Red Stockings were NABBP champions, becoming baseball’s first professional “dynasty” team. The Cincinnati-Boston history, these “firsts,” carved out new territory for professional baseball and made this team special. For this reason, their memorabilia is highly sought after.

Albert Spaulding, later to become a co-founder of the A. G. Spaulding sporting goods company, joined the Red Stockings in 1871. The following year he won 38 games while losing only 8 as the team compiled an overall 39-8 record.

He, along with Harry and George, were all eventually elected into baseball’s Hall of Fame.

After the league folded in 1875, the team joined the newly-formed National League. They went through a number of name changes, taking the name Boston Braves in 1912. In 1953, the team moved to Milwaukee and then, in 1966, made its final move to become the Atlanta Braves team we know today.

Story of the treasure

As it turns out, this woman’s great-great-grandmother ran a boardinghouse in Boston back in the 1870s. The Red Stockings players used it as their home when they were in town during the season.

Included in the treasure, which had been passed down through five generations, was a letter, hand-written by the Red Stockings players, written while they were traveling on a road trip to Washington. It was sent to Mrs. Parker, the lady who ran the boardinghouse. The letter’s musings gave insights into the lives of these traveling baseball players in that day and age.

Notations in the letter mentioned how much they missed the good cooking and revealed the player’s closeness to Mrs. Parker. For example, Spaulding said, “Would that we were home again. My sentiments have been expressed in the above paragraphs. Big meals.” Harry Wright wrote, “I am just going up stairs to supper and feel awful hungry but do not expect much, poor meals here. Too hungry to say more.”

The baseball cards and photo

Mort Rogers developed his “Base Ball Photographic Cards” as scorecards for fans to keep track of the game. The cards were 5 inches by 3½ inches and were usually folded in half, opening up like a small greeting card. A player’s portrait would be on the front cover and an advertisement of some sort would occupy the back. Inside, one found columns representing the innings. This allowed the fan to keep score.

The 12 existing photo cards in the set had been collected by Mrs. Parker’s son when he attended games. Eleven featured individual players playing on the 1872 team and the twelfth was a team card. It had small pictures of each player on the 1872 team.

The cards were not in the best condition because they had been trimmed down to fit into a photo album. Considering their age, the pictures were still in good condition.

One more picture card was part of this treasure. It was a cabinet picture card of Albert Spaulding, the oldest one known yet to exist.

The value of these picture cards is due to the fact that experts didn’t believe that these cards existed any more. They are, after all, 142 years old!

Apparently, at one point in time, the woman had been offered $5,000 for her treasure trove. She had turned it down, desiring to keep the heirloom in her family.

So, she took her treasure to the Antiques Roadshow taping session. It quickly caught the attention of the appraisers for the show.

What do you think this treasure might be worth? Watch the following video to find out. Be sure to watch the woman’s face when the value is revealed.

By the way, if you are interested in a little more detail about this treasure and the Antiques Roadshow process, you can read a great article by Larry Canale on the Sports Collectors Digest website. To do so, click here.

Does this surprise you? Is it a fair value? Share your thoughts and opinions in the comment section below. I would love to hear from you.